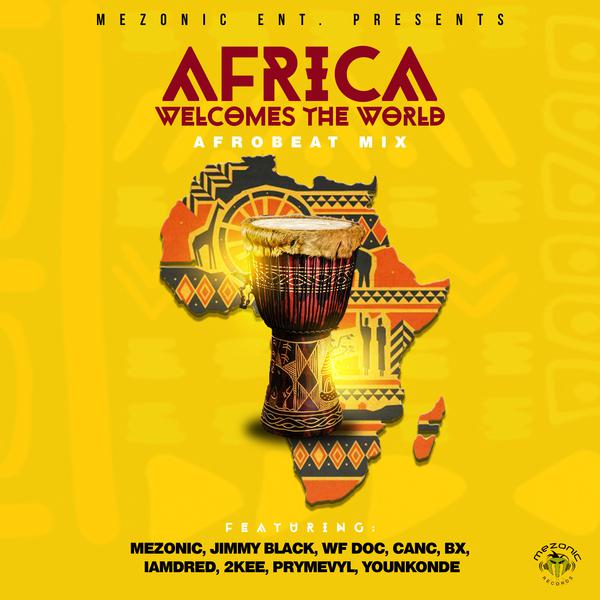 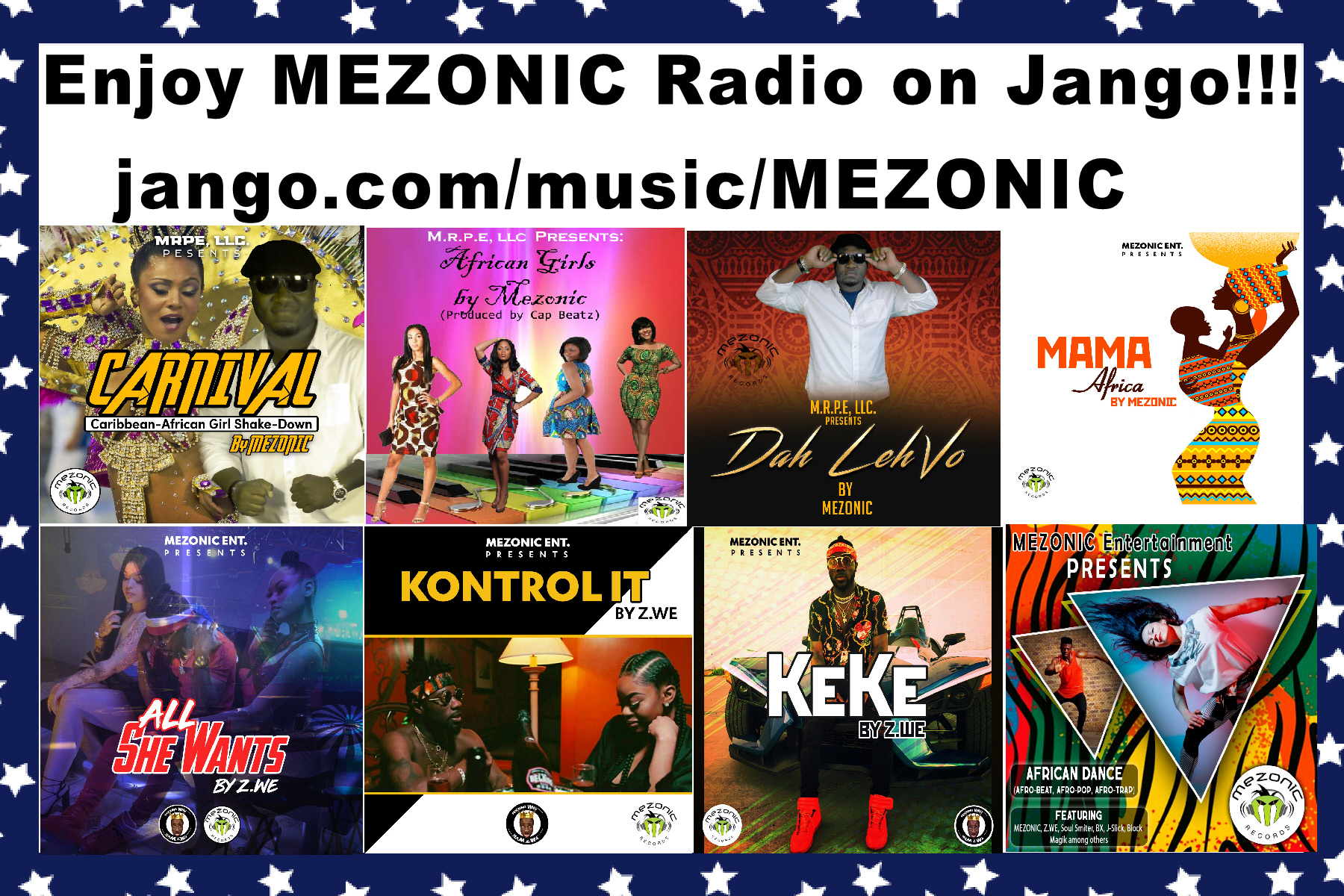 International Artist/Song-Writer/Producer, MEZONIC is an Afro-beat/Dance-hall and Hip-hop artist. MEZONIC has been making music since 2005. He started out as a Hip-hop artist and now making Afro-beat. MEZONIC recently released his 7th studio album.
Influences Davido, Burna Boy
Sounds Like Davido, Wizkid, Burna Boy

Short BIO
Hi, my name is MEZONIC. I am an international artist and producer based in Charlotte, NC, USA.
I perform mainly uptempo original Afro-beat and Dance-hall songs that keeps my audience dancing.
I am also a very good hip-hop artist and performer. I am willing to perform uptempo and original hip-hop

songs as well as classic songs from groups like The Roots, A Tribe Called Quest, Mos Def & Talib Kweli etc..

Depending on the gig, my set could include Afro-beat, Dance-hall, Hip-hop, live drumming (bongos),

or live music production (mpc & a keyboard).  Thanks for your time and consideration. Feel free to

MEZONIC's Long BIO
International artist, songwriter, producer, and performer Mezonic is a beacon of light with respect to music. His primary genre as a performing artist is conscious hip-hop music. However, he also performs party rap, pop, hip-co/afro-pop, and world (African) music. Mezonic was born in Liberia, West Africa and influenced by many different types of music while growing up. He relocated to the U.S.A with his parents when he was 17 years old. Mezonic completed high school in Charlotte, NC at Independence high school. He then decided to attend undergrad school at DeVry University (Decatur, GA) where he earned his B.S.C in Electronics Engineering in 2003. Atlanta was also a place that made Mezonic realize that music was his love. While there, he met a few friends that were heavily into producing and recording music. Mezonic decided to learn how to produce. His productions styles vary. Genres include Hip-hop, party rap, dirty south, pop, alternative, reggae, and world music. After moving back to Charlotte, he formed his company Mezonic Records now M.R.P.E, LLC.
Mezonic has released six albums, produced two albums for Carolinas’ BFAM his group, and created several music videos. His songs have also been played and featured on several radio stations and mix shows (i.e. Shade45’s All Out Show & Keep It or Sweep It). His 2nd album Inspire showcased his talents to a higher level because his song “Internet Girl, was a smash radio hit. The song was promoted through www.registermymusic.com. On his 3rd album Never Give Up, his single “What It Is” made the media base/radio-wave charts. Between the Fall of 2011 to early 2012, Mezonic gained more than 30000 fans on Facebook. Mezonic & fellow Liberian artist, Jimmy Black joined forces in 2012 to form a group called, AFRICAN KINGS OF HIP-HOP. Their mix-tape is out now. Look out for their joint album soon. Mezonic release his latest album Inspire 2 (Redemption Of The Ghettos Worldwide) on December 9, 2015. His video for the single (Victory Laps) was released in February 2016. Mezonic signed a huge distribution deal with an affiliate of Alliance distribution in April 2016 which made his album available for national as well as international orders (eg. bestbuy.com, amazon, etc...) The album is currently in many Independent stores nationwide. The store release date was June 10, 2016. Pick up your copy of Mezonic's  album (Inspire 2 - Redemption of the Ghettos Worldwide) today, everywhere online and here http://mrpellc.com/inspire2. T-shirts are also available to order. MEZONIC is still currently promoting his latest album called CARNIVAL that was released in December 2017 (see http://mrpellc.com/carnival

2010 What It Is makes the Urban Charts

2013 Whose Drawers Are These? Liberian Movie released on YouTube

-- Released the Top 100 Liberian Music Videos to the U.S/WORLD media

--Released Singles Down For Me & U Acting Spay during the summer of 2018 see http://mrpellc.com

--Did a successful album release concert in Atlanta, GA (December 2018)

'Africa Welcomes The World' was released in the late forth quarter of 2021, but after viewing some of 2021s most trended, we bumped across hashtags of MEZONIC's music all over the place.

What's more, we got in touch with him and finally got the album link of compilation singles off his past three albums, 'The Love For Mama Africa' released in 2020, his 2018 hit album 'Carnival', and his incredible 2015 rap album 'Inspire 2'.

There are also three bonus singles, 'Run Me The Mah', 'Flaunt IT ft. CanC', and 'Daa Lah', thrown in.

The album's cover features a handful of artists that are featured on the project.

Here are popular music videos for songs that are featured on the compilation project.

Shake Dat Tumba 3 is MEZONIC's best music video so far in terms of quality (shot with 4k camera technology), location (Las Vegas, NV -- at the MGM Grand Hotel, where big time boxing and restling fights take place.  The famous deceased rapper 2pac attended Mike Tyson's fight at this place before being gunned down later on the same night.), MEZONIC rented the presidential suite in the hotel where he shot the video with 5 professional dancers/models. This was all done to give Liberians/Africans the best viewing experience of a 100% quality Liberian music video.

According to MEZONIC Entertainment's CEO, he's no junior to album 'droppings'. His first album 'Liberia What's Left' was released in 2006. See here https://music.apple.com/dk/album/liberia-whats-left/189070211

Meanwhile, compilation albums are just as, if not more successful than when the songs were released on the albums for which they were originally intended, and sometimes these compilations go on to become some of the greatest records of all time.

Let us know in the comments, your rating. Like and share, also stand a chance to win great holiday prizes.

After a long 2 years and 8 months of promoting his album CARNIVAL, International artist/song-writer/producer MEZONIC, has released his 7th studio album called, THE LOVE FOR MAMA AFRICA.  This album was definitely inspired by the single, Mama Africa by MEZONIC that was released in 2019. MEZONIC executive produced this album. The album features include: IamDred, Bx, Jimmy Black, Prymevyl, Wf Doc, 2Kee, & Younkonde.  Production credits go to Big H, Kitoko Sound, Cap Beatz & MEZONIC Productions. Thanks to the mixing and mastering engineers, Kevin F. & Bx.  Thanks to the graphics designers Chris and all the others who played their part on this porject. All of the songs follow the Afro-beat or Mama Africa theme except for RIDING featuring Bx, which is more of a Hip-hop/R&B record. The latest 2 singles, She Ready and Shake Dat Tumba 3 are doing extremely well with radio stations in Liberia and other West African countries.  The single, Fine Geh Never Suffer, although an older song that was previously released on the CARNIVAL album by MEZONIC is still receiving airplay in the USA, Canada, some European countries, and other African countries. It was recently selected to be played in rotation on the Caribbean Broadcast Network among other playlists and radio stations. MEZONIC said, "I am grateful to my almighty God for blessing me with just being patient enough to accomplish this huge milestone.  My hope is for the world to start viewing Africa as a land that offers us so much opportunity.  This is a place where you can make something out of nothing.  You can start most businisses in Africa with a way lower price tag than any other place on the earth."  Hope you all love the album!!! Download it, stream it, share it, book MEZONIC for performances and speaking engagements, and leave your comments about this album.  The entire MEZONIC Entertainment family hope that you will love and enjoy the album, The Love for MAMA AFRICA.  For the idea of the song, Mama Africa, please read below.

Mama Africa is a heartfelt song about the beauty of Africa. The song was recorded on February 28th, 2019 by International Hip-hop/Afro-pop Artist & Producer, MEZONIC. The full mix and master was completed by MEZONIC's engineer on March 7th, 2019.

Many Africans are simply tired of having to explain themselves to the western world about how beautiful the continent of Africa is. The western media (U.S.A, Europe, & Asia) prefers to show all the negative aspects of Africa (Diseases, Poverty, Malnutrition, Shacks, etc..) Could this negative image be a propaganda to not only divide black people around the world but also a method to exploit the natural resources out of Africa?

Africa is so much more than just nature. We have world-class tourist destinations, exotic beaches, exotic and different people, beautiful cities, astounding resorts, and so much to offer.

MEZONIC did his best to really beautify Africa in the minds of people who know only the opposite. Enjoy the song, the promotional video, and share with friends and family.

Enjoy more than 50 Liberian Music Videos by watching this playlist!!