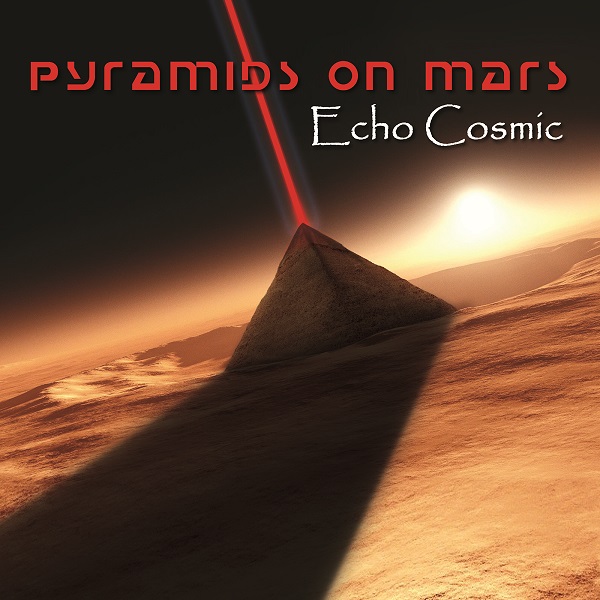 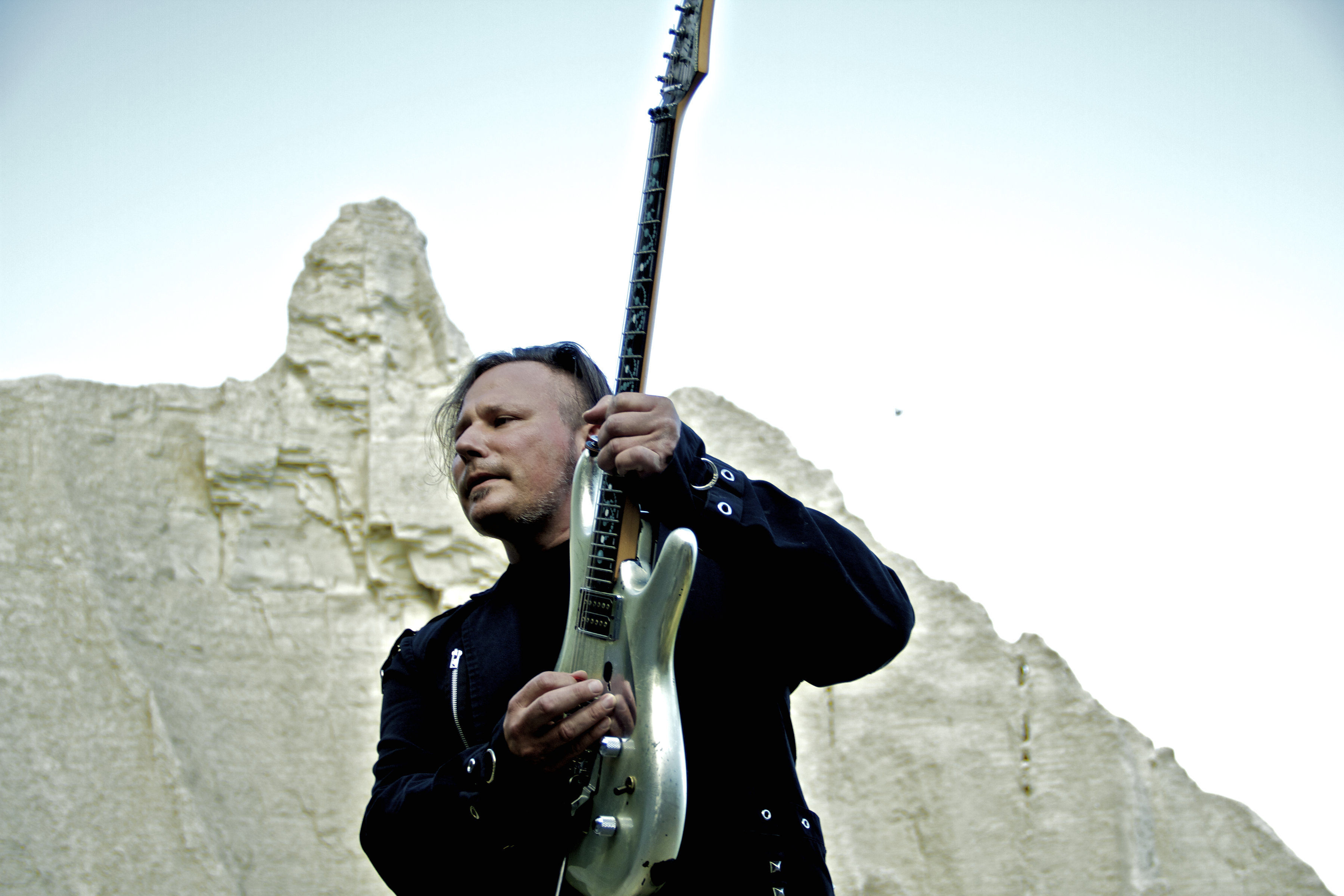 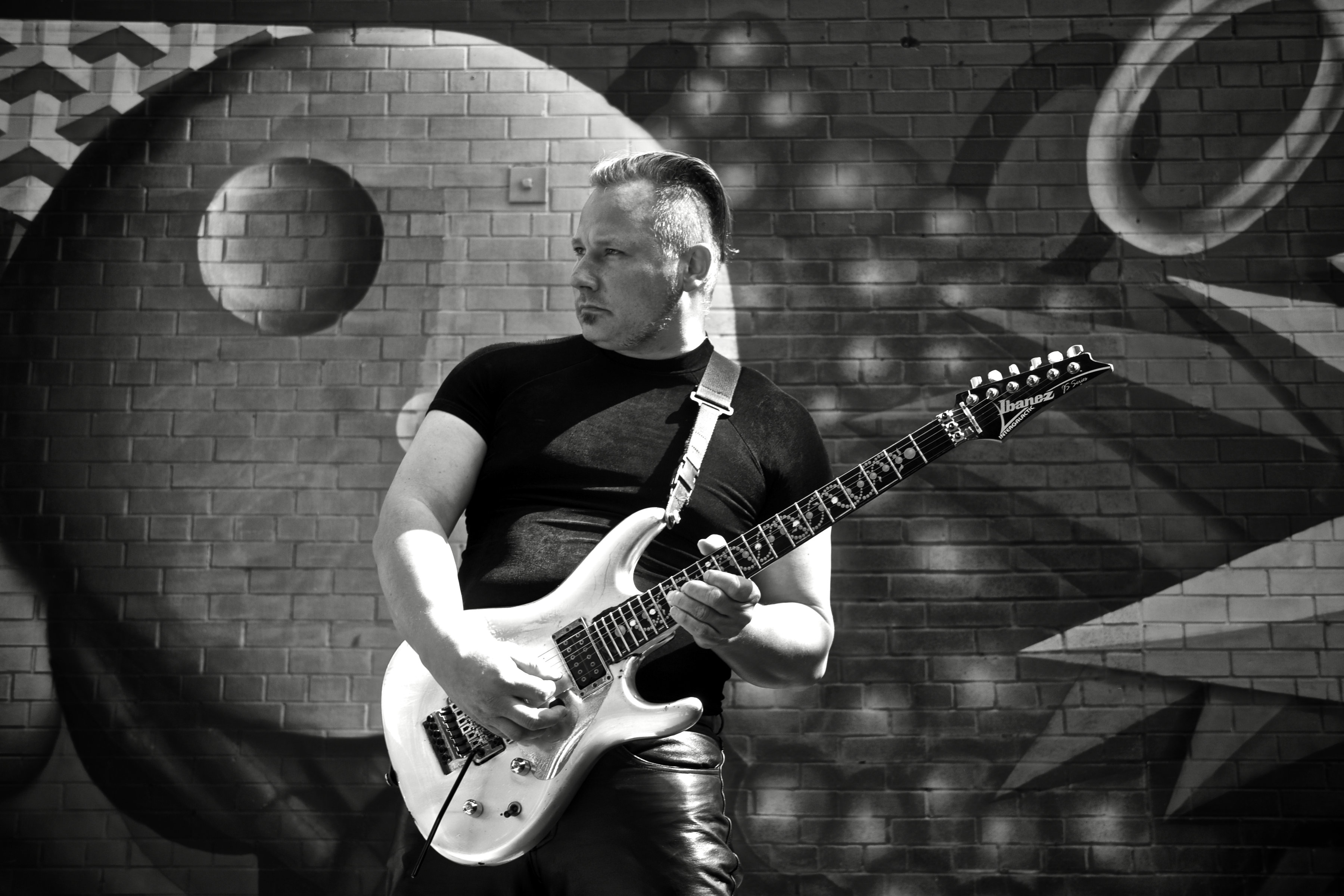 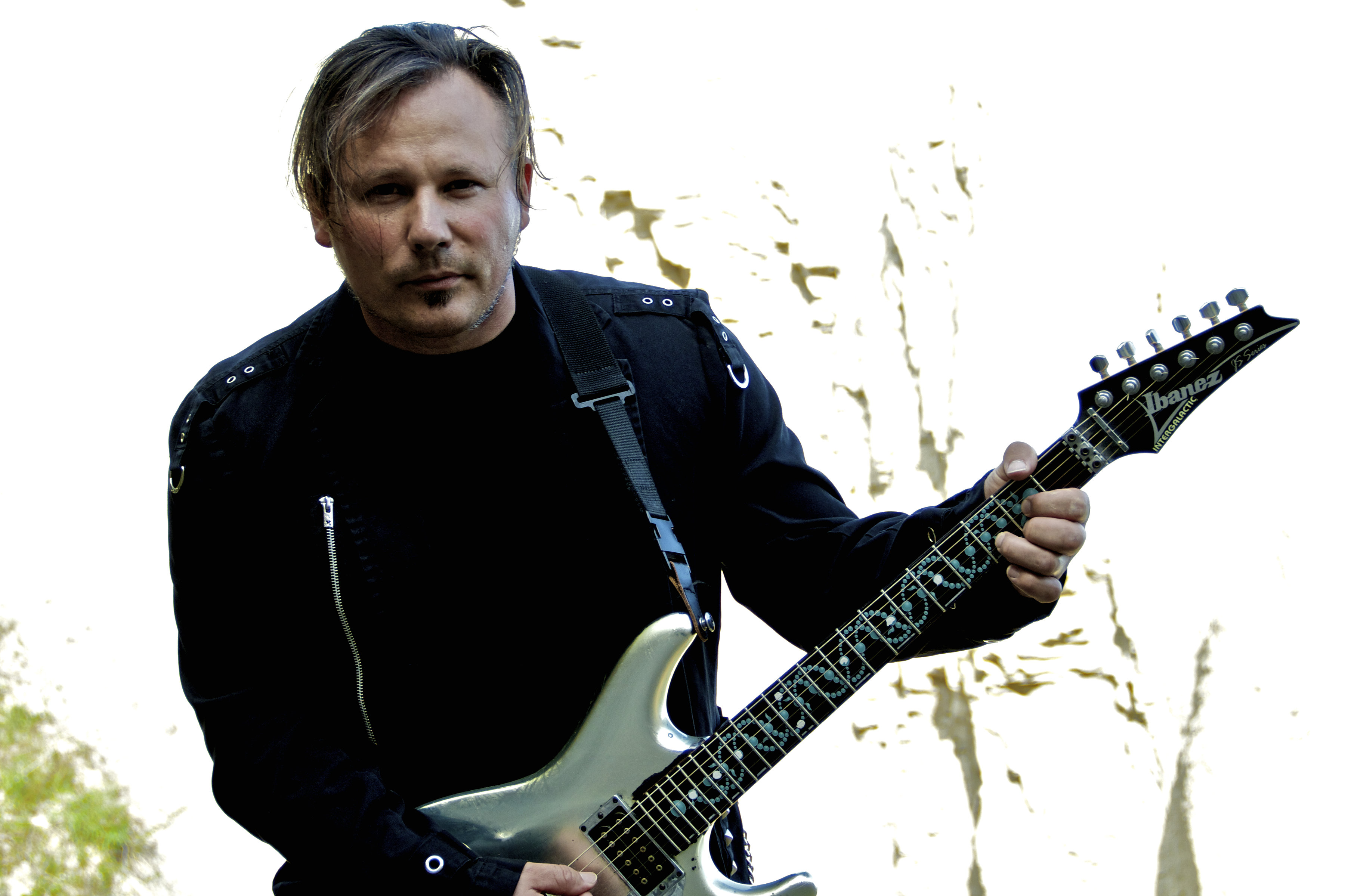 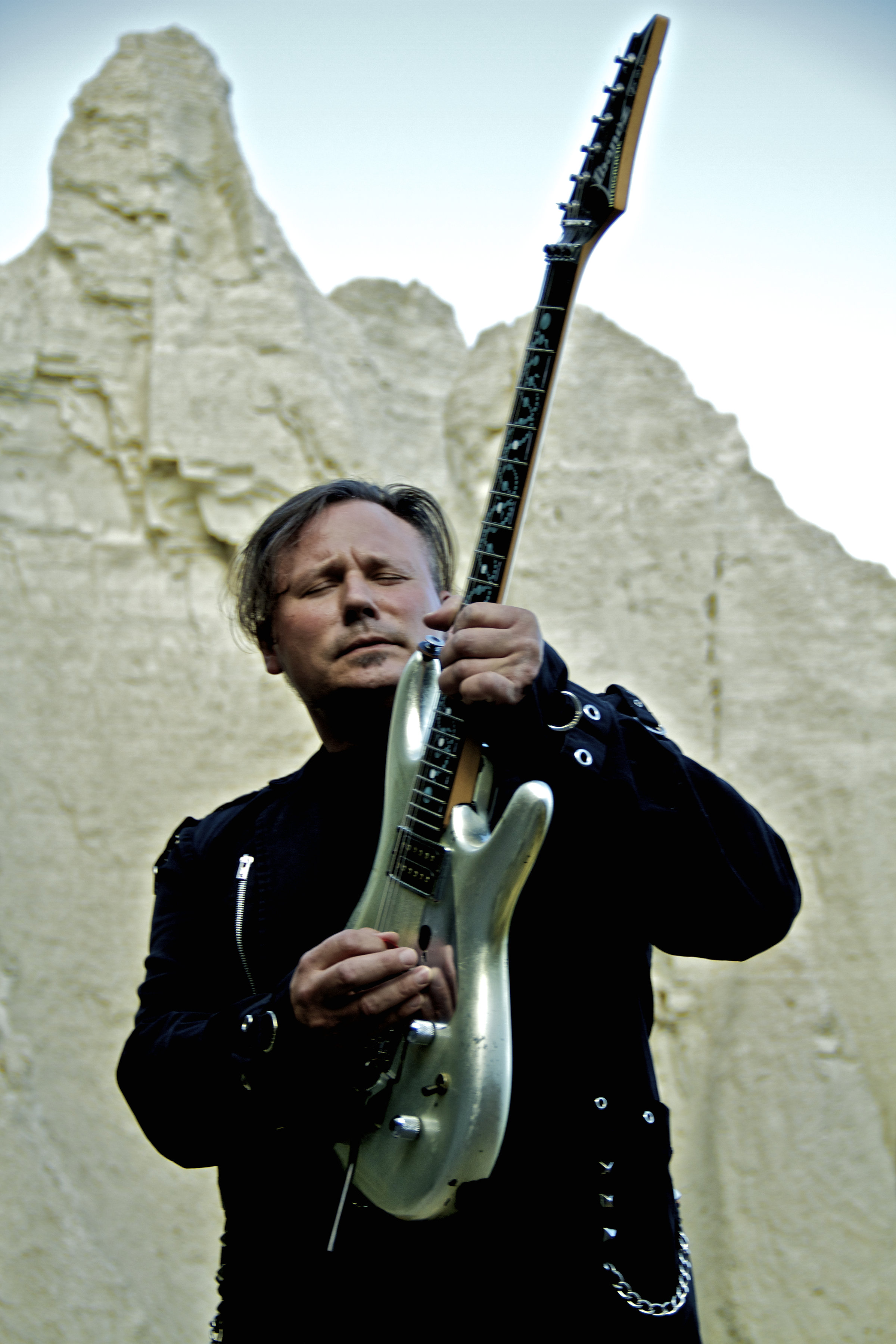 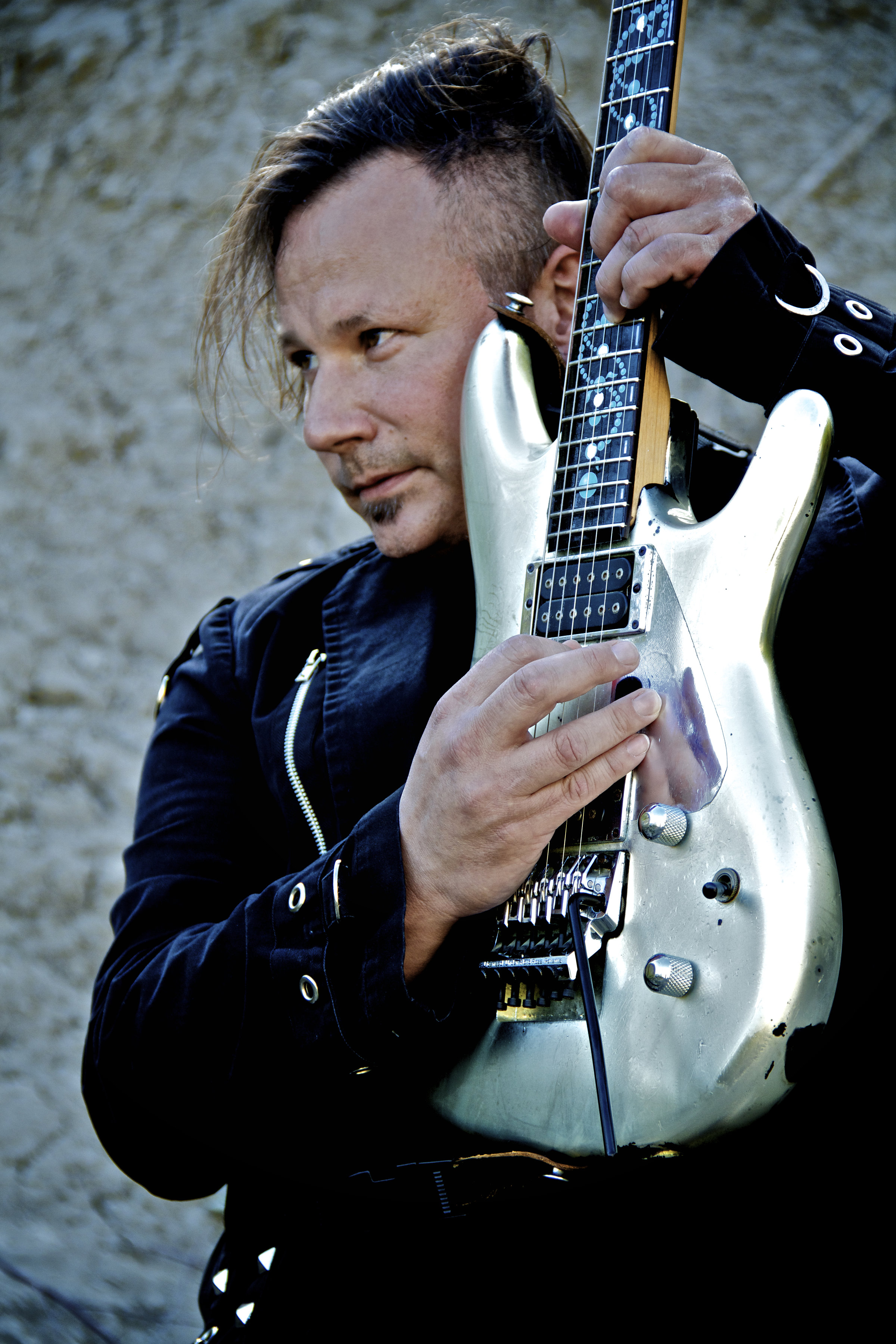 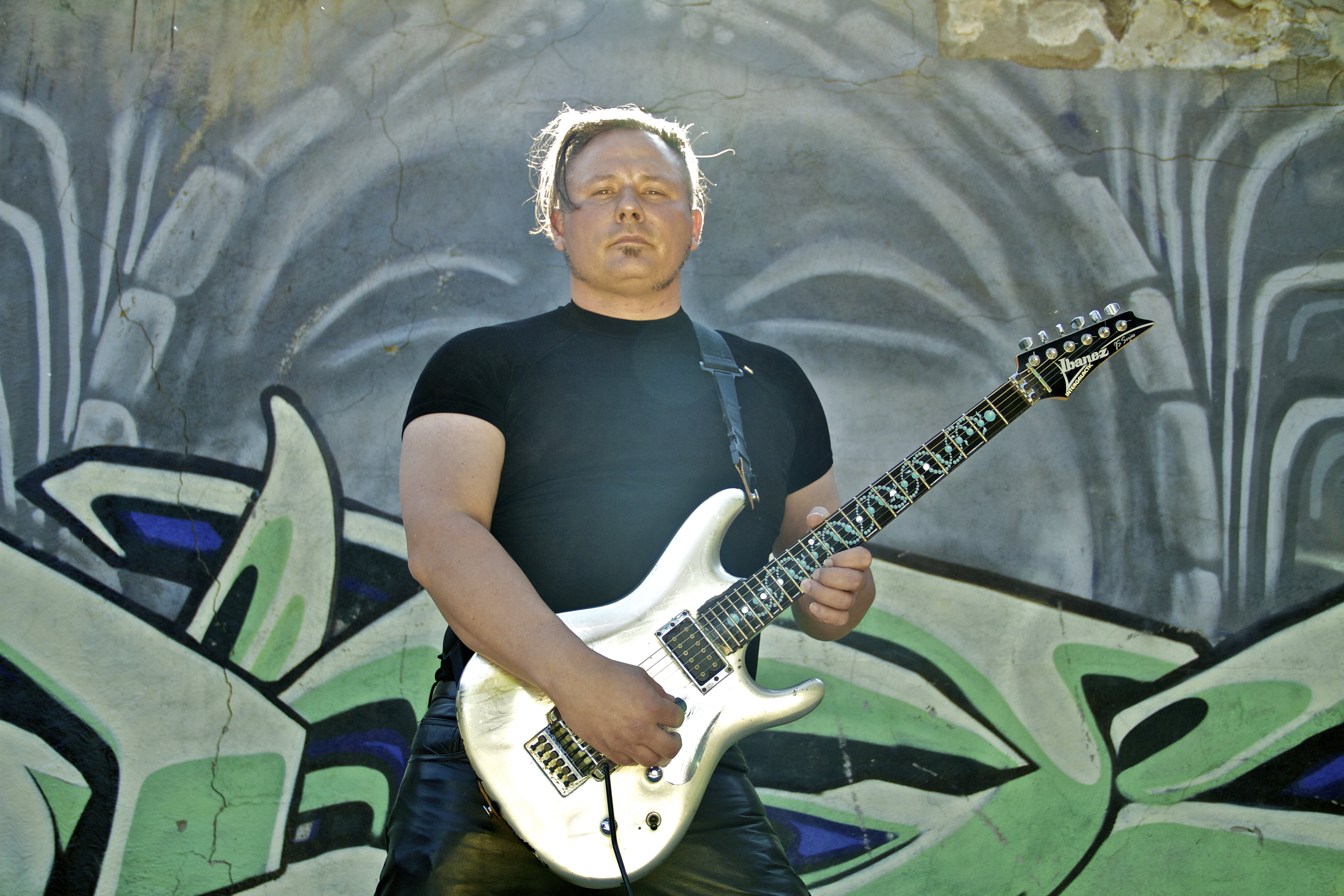 Pyramids on Mars is  music that really sounds like it’s from Mars!!

Every once in a while there comes along a band that is so different or unique, you would think they were dropped on Earth from another planet.  Pyramids on Mars, is one of those bands.

What first catches you, is that they are an instrumental band.  A combination of elements such as hard rock, industrial, metal and psychedelic rock.  And then... the lead guitar comes soaring in.  Well crafted, beautiful, melodic phrases so catchy and memorable they will be stuck in your head the rest of the day.  The guitar has become the "vocals" of the music.

As the solo project of guitarist Kevin Estrella, he wanted to do something musically different that would stand out from the crowd.

"Pyramids on Mars is the embodiment of who I am, really.  My musical influences, my philosophies on life, the universe and our place in it."  Kevin went on to say, “I have always been attracted to space, and a lot of my sound is influenced from my childhood growing up in the '70's.  Some of my favorite TV shows back then were Star Trek and Space: 1999.  Plus I am a huge Rush and Pink Floyd fan!  Thus I use a lot of analog synthesizers like the Minimoog and Oberheim Polyphonic.  Predominant of the '70's era and used exclusively by those bands.  They are just so warm and mysterious sounding, they resonate with me."

His musical style is very similar to world renowned rock guitarist Joe Satriani.  So much Kevin has nicknamed himself the "Satriani of the North."

"Of course Satriani is a huge influence on me", he says.  "But he (Satriani) does more of a bluesy thing.  I am more  influenced by classical music.  I absolutely love baroque classical composers J.S Bach and Antonio Vivaldi.  They are a paradigm shift for me, and are my biggest musical influences.  I spent 3 years in fact, studying classical guitar.  Mix my classical influences with all the bands I grew up listening to like Rush, Iron Maiden, Metallica, Ministry, Pink Floyd for example, and bands like Meshuggah, I am a blend of it all.  And much more...."

Kevin recorded, produced, engineered and mastered his first debut CD, self titled "Pyramids on Mars" released in 2013.  He performed all the instruments on the album and did all the drum programming.  He has been capturing music industry attention, and getting international radio airplay in the U.S, Canada, South America and Europe.  Pyramids on Mars continue to gain a tremendous amount of fans worldwide on Jango Radio, Soundcloud, Reverbnation and Twitter.  His goals are to continue to build a loyal fan base and bring his powerful, ambient music to the masses.

Pyramids on Mars really is music from the Mystical Red Planet.

"Kevin Estrella, much like Vai, and Satriani, can make his guitar truly communicate and display emotion.  That's NOT a skill that comes along with practice.  That comes purely from a connection established between a musician and their instrument that is nearly akin to what we know as 'true-love';  There's a real passion that Kevin plays with that only comes along every so often... a real magic"   - SleepingBagStudios -

"Kevin Estrella is in the same ballpark as David Gilmour".  - Metallian -

"Pyramids on Mars have released Echo Cosmic, which is easily the finest instrumental metal album since Joe Satrani's seminal Surfing With the Alien." - Steve Earles, Hellbound.ca -

"With the likes of Joe Satriani, Steve Vai and David Gilmour you would say 'Wow, that's a great guitar player!'  If you would have known him.  Shamefully, thats the thing.  Kevin Estrella is probably the most criminally unkown guitar player on the planet." - Dutch Metal Music

“Amazingly, Pyramids On Mars is the brainchild of just one man, a certain Kevin Estrella, who handles all instruments and drum programming. He truly is a virtuoso, however, unlike most virtuosos, he can write songs and play with feeling. His peers are the likes of Joe Satriani, Stevie Vai, Ritchie Blackmoor, Jimmy Page, and Randy Rhodes. Note that I said peers; he stands well on his own feet…I truly hope as many people hear this extraordinary album as possible—it truly is brilliant and deserves the widest possible audience.” – Hellbound
“PYRAMIDS ON MARS is the brainchild of Kevin Estrella. I immediately forgot this was a one-man project as soon as I started listening to new album Echo Cosmic…has a sound all its own. Derived of many styles, but still very unique…PYRAMIDS ON MARS, and Kevin Estrella have enough different sounds and feels to keep this entirely instrumental album interesting till the end…impressively so” – Amps And Green Screens
“If you’re a fan of talented and virtuous guitarists, it’s worth following this man. I recommend it!” – Metal Temple
“‘Echo Cosmic’ is a great trip through the immense and ever-expanding universe of guitar music.” – Merchants of Air
“With the new release “Echo Cosmic” coming out on September 8th, 2015 they continue to blow minds and bend genre. The last I can explain by using two completely different bands in one sentence. This band accelerates from Iron maiden to Meshuggah in about 2 seconds….Overall this record is mind bending and goes beyond what is being made nowadays. Pyramids on Mars blows borders of metal and rock away and leaves you with a satisfied feeling.” Rating 9/10. – Dutch Metal Maniac
“Echo Cosmic has so much going for it it’s hard to know where to start. It’s 10 tracks & a 55 minute journey into Estrellas mind, & what a mind it is. There’s so much going on I’m amazed he hasn’t imploded….Kevin Estrella demonstrates that not only is he a very accomplished guitar virtuoso BUT he’s genuinely multi talented playing all the instruments himself on this record.”
– All About The Rock

What Fans have have say about Pyramids on Mars:

“Pyramids On Mars sounds like Metallica travelled thru a wormhole and grew a new set of balls, cool stuff!” Brett Kendall

“If the UFC Built A DOJO ON MARS & Televised Space Alien Cage Matches, Pyramids On Mars Would Perform The Music!” Brett Kendall

“You really did take me to Mars!” (music fan)

“Your music made our drummers dick  harder than when he took two hits of Viagra!” (music fan)